Awakened yesterday to the sound of hammering. I gulped down half a pint of dusty ribena I had thoughtfully left beside my bed a few days ago and glanced out the window. Nothing to be seen. I thought back to the previous night. I had consumed a couple of glasses of whiskey to soothe the sore throat that was the remnant of the cold I had last week, but nothing in sufficient quantity to cause this hammering. The cause must be exogenous, I deduced, but not visible from the bedroom window.

I eased myself out of bed and into my jeans and strode barefoot into the living room. From this vantage point I could see a man nailing a sign to the side of our porch. (This isn't a porch in the sense that most people understand it - we live in a first floor flat that is so narrow that the front door on the ground level has to stick out a bit otherwise there wouldn't be room for the stairs only a ladder - I am calling this sticky-out-bit the porch for purposes of brevity).

Here is what the sign said (I have carefully cut the name of the estate agents in half so as not to identify the bloodsucking parasites who do nothing and charge a fortune for the privilege): 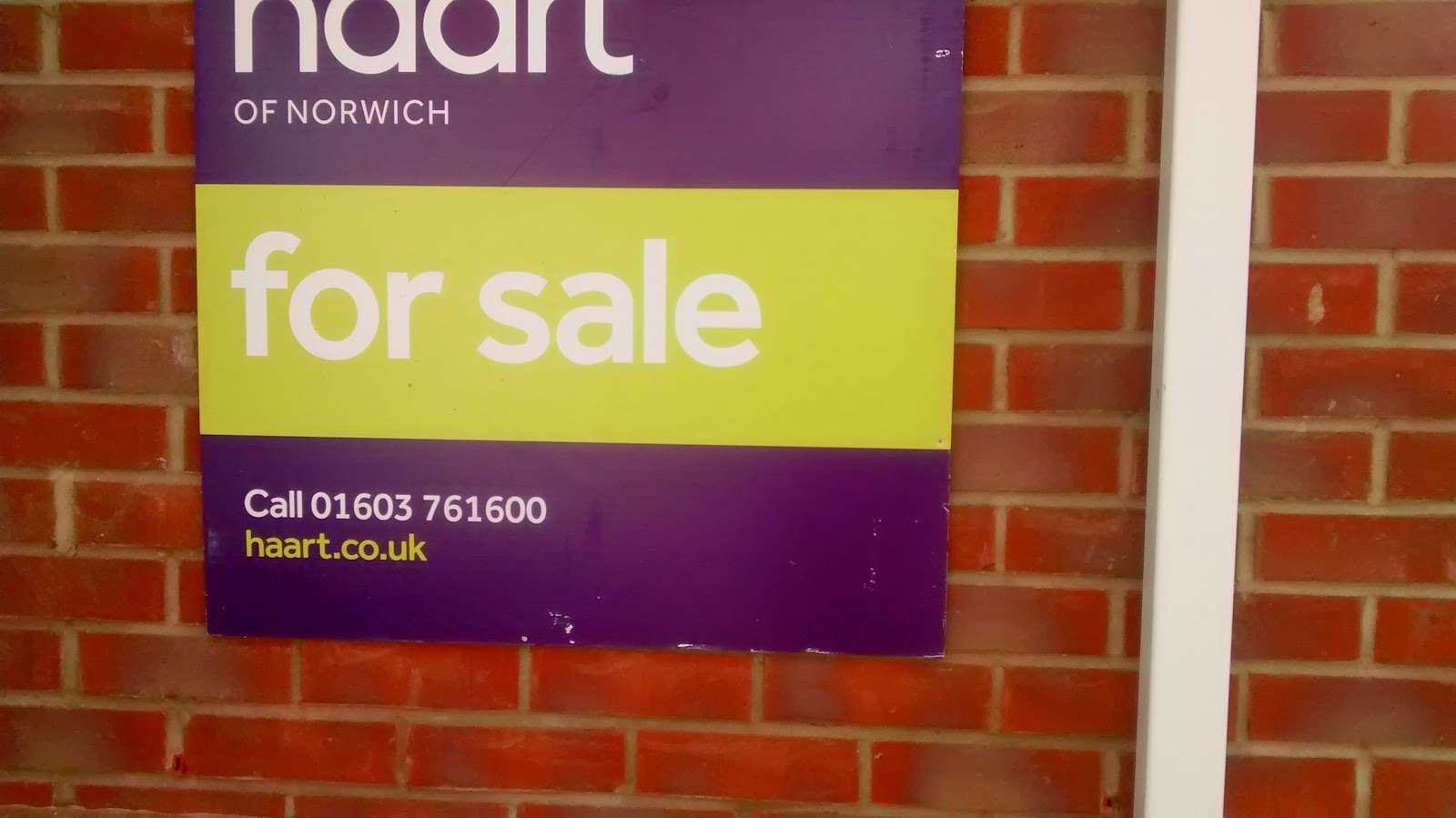 And that, in the modern age, is how your average tenant in private rented accommodation finds out that their home is once again subject to the vagaries of the housing market. We will be expected to open our doors whenever a prospective buyer expresses an interest. We can be forced to sign a new contract (we can't legally be forced, but they can serve notice if we refuse and kick us out). We can be charged for the preparation of that contract. The unnamed Estate Agent currently charges tenants a £100 fee to print out a standardised contract and post it to them - no stamped addressed envelope is included for the contract's return.

Our landlady has actually been pretty good in the 18 months we've been here. She has been quick to fix things and although initially reluctant to transition from a shorthold tenancy to a rolling contract she soon changed her mind when she realised that the Agency were going to charge her £100 as well! In fairness, she did text me to let us know the property was going to be put on the market. So the nailing up of the sign wasn't the first I knew of it this time: although that has happened to me before.

I don't especially blame my landlady. She bought the property for £105,000 five years ago and the Agency are telling her she can get £140,000 for it now. Charlie and I (and the flat's pre-inhabitors) paid the mortgage repayments in that time and she gets to pocket the difference. I blame the system - generally the system of ownership and property (but Charlie gets cross if I go on about that too much) and specifically the bastards like the ones who nailed that sign to side of our home.

Posted by Finnginn at 07:42 No comments:

A quick update on the sausage roll availability between Mile Cross and the Temple Bar.

You will recall of course that Louis's Deli on St Giles makes the best sausage roll in Norwich, possibly the world (declaration of interest: I once got a free one because they were slightly burned on the bottom) and that the sausage roll at Upper Crust, though championed in some quarters for being larger and cheaper, I always found limp, pale and soggy. Well, I feel vindicated because it turns out that Upper Crust bakery's sausage rolls were secretly bulked out with rodent droppings and rat poison and the fine from Environmental Health and subsequent exposure on the front pages of the Evening News last month has caused them to close their doors forever.

I spent a happy few weeks making myself late for work on a Tuesday by hurrying over the bridge (ignoring the local coffee shop's chalked entreaty to throw myself off) and queueing up with all the language students to purchase a sausage roll at Louis's.

Then, one day, a notice appeared in the window of the former Upper Crust premises:

Pyebaker. P. Y. E. Pye. Pye is an English surname of good heritage. (Henry James Pye was of course Poet Laureate from 1790 to 1813 - remembered chiefly now as the first Poet Laureate to insist on being paid in money instead of the traditional annual half-puncheon of wine. Half a puncheon, or one tierce, is an astonishing 160 litres! If you have a minute you can listen to a robot read Pye's Song: Fair Delia while each Sighing Swain on this poetry website.) I hope that Pyebaker is owned by one of his descendants and is not one of these faux-olde-worlde misspellings.

Pyebaker is open now but they had sold out of sausage rolls when I popped in for a look so I bought one of their pre-made ham and english mustard sandwiches that I must say was rather nice. I was going to hold off on this blogpost until I had sampled the Pyebaker sausage roll but to be honest I wanted to write something light-hearted after all that A.I. stuff last week and the only other idea I had was something about linguistic environments being insufficiently rich to account for first language acquisition.

Posted by Finnginn at 06:06 No comments:

Sometimes I promise to return to a topic and never do (e.g. this one, optimistically labelled 'part one') and sometimes I stick doggedly to a topic that I find interesting (e.g. my obsession with non-Skaldic Norse verse last year) in defiance of dwindling interest and declining readership. I'm sure you will all be delighted to see that today I am returning to my theme of the week: Artificial Intelligence.

Steve from Weymouth posted on my alter-ego's Facebook page that he agrees with me about the non-imminence of the Singularity (the hypothesised point at which machine intelligence surpasses human intelligence) but wants to know whether I think it will always be unachievable.

Persecuted genius Alan Turing was the first to point out that 'Can machines think?' is basically a meaninglessly unanswerable question and replaced it with the rather less snappy: "Is it true that by modifying a computer to have an adequate storage, suitably increasing its speed of action and providing it with an appropriate programme, it can be made to play satisfactorily the part of 'A' in the Imitation game?" (The imitation game - now usually called the Turing Test - is the game where an interrogator has to guess which of two screened off interviewees is a machine and which a person.)

Turing predicted in a paper written in 1950 (well worth a read) that a computer with a storage capacity of 10 to the power 9 would be available by the end of the century and would be adequate to the task. Your average Playstation 3 could perform nearly two trillion floating point operations per second if called on to do so (and you use it to shoot zombies - shame on you). Infinite (in the narrow sense that more space could be created faster than we could fill it) amounts of information can be stored in the Cloud. So presumably we are just waiting for the relevant program to be written. It hasn't been written. And you'd think that the $100,000 Loebner Prize on offer since 1995 would be sufficient incentive.

Designing a computer programme of greater intelligence than a human being is a conceptually difficult idea. Is it even a possibility, given that the designer is human (or a machine of equivalent human intelligence)? Almost by definition, such a programme must have the capability to design and solve questions that a human cannot consider. So how can a human designer instil such a capability?

There may be more of this later in the week. It's something I clearly need to get out of my system. But today's my day off so I'm off to the White Lion for a pint.

Posted by Finnginn at 08:10 No comments:

The Singularity - that point where machine intelligence surpasses human intelligence - is apparently widely assumed to be imminent. My pal Alice recently brought this article to my attention. The author writes in a chatty digressive style with amusing graphs and gifs but essentially his argument appears to be this:

1.The information processing abilities of computers have increased and will continue to increase.

2.The increase of information processing abilities will one day equate to human intelligence.

3.A machine functioning at this level will be able to improve itself so that it will surpass human intelligence.

When it comes to computations, computers have the edge. When IBM computer Deep Blue played chess grandmaster Gary Kasparov, it did not intuit the beauty of the game as any six-year-old might. Nor did it win by calculating the best move logically. The computer was programmed with the knowledge of millions of games and their outcomes and processed these - choosing moves that in identical situations had led to victory for other players. An impressive enough feat of processing power - but bears no relation to how humans think even about something as trivial as chess. Kasparov might as well have been playing a committee of a hundred grandmasters with access to all the books. He was convinced that he could have beaten Deep Blue in a rematch by taking the games in less well documented directions, but IBM had their headlines and their increased stock value and research into chess computing ceased. Kasparov continued to play and became involved in progressive Russian politics. Deep Blue was dismantled - half of it is on display at the National Museum of American History.

An output from a computation can only be random or determined by its program. So a simple chess program might make a random move to start with, then make moves determined by its program. A key part of human intelligence is creativity. I remember as a child in chess club getting bored with playing chess and inventing new games to play with the pieces. Ascribing the pieces new moves that increased or decreased their powers. What if bishops moved like queens? What if you make one move, then I make two, then you make three and so on? A computer program cannot do this. It is limited by its nature. This creative output of human intelligence is neither random nor determined by programming - I had after all been programmed with the rules of chess (if not with the discipline to apply them for the full hour) - and these are the only two options available to the computer.

The problem of creative endeavour in humans is not understood. We know it happens and we experience it whenever we paint a watercolour, compose a song or engage in conversation. We have no explanation for it. To design computer programs that mimic or produce this function will require radical new ideas that explain how it works in humans. It may be a problem that human minds are incapable of solving. The futurologists who predict an imminent Singularity seem to think that these 'hard' problems of consciousness and creativity will themselves be solved by the increasingly intelligent machines. But I don't buy it. An increase in computing power alone will not give birth to human level machine intelligence and that is a minimum requirement we must demand if machines are going to solve our problems for us.

I'm off to play the calculation engine at my favourite chess website Hopefully, it will not tip the board over if it starts to lose.

Posted by Finnginn at 07:52 No comments: