As previously reported, our landlady is selling our home and we have to find somewhere new to live. Moving used to be a lot less hassle when all I owned was a case of clothes, a dozen or so boxes of books and a chess set. Now I appear to be at an intermediary stage in life when I am rich enough to own furniture, but not rich enough to pay someone else to move it.

We are trying to be positive and look for a place which will be an improvement on our current flat. Maybe with some outside space? Charlie would like a bit of garden. Spike would like a conservatory, but he doesn't get much of a say because nobody can remember the last time he contributed his share of the council tax.

The good news is that now she wants to sell the property the landlady is finally going to fix the leaky shower. I am waiting for the 'handyman' to come round now. I am sure he will be impressed by what I have achieved with gaffer tape and superglue in the absence of someone with professional plumbing skills. He may even feel that his presence is superfluous.

And while we are on the subject of superfluity. It is probably time that I showed you folks the latest addition to our household: 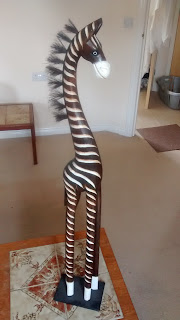 A recent visitor to our shores (presumably unfamiliar with British social habits after dwelling on the Isle of Man for a decade or so) presented it to us as a gift in lieu of wine. And not being the sort of people who will examine the teeth of a gift-horse (or even a weird sort of gift-giraffe/zebra hybrid), we accepted it. Now it stands in the lounge looking at me with its weird painted eyes until I turn it to face the wall. In my view, it is exactly the sort of gift you don't want to receive when you are trying to downsize all the accumulated crap in your life ready for an enforced move. I am in a minority in this view, everyone else loves it. So it looks like the charmless thing may be in my life for some time yet. We still call it "...that weird giraffe-zebra thing that Jamie gave us..." Suggestions for names welcome... and if anyone can finally settle the giraffe/zebra dilemma please get in touch.
Posted by Finnginn at 06:24 No comments:

What is the sum of the first four cubes? (I'll put the answer in the comments - but it should be obvious)

Incredibly, this is the one hundredth of these blogposts that you have read. Well done you. I looked up the number 100 in my Penguin Dictionary of Curious and Interesting Numbers to see if I could crib a few facts to include subtly throughout this post but it turns out that 100 is not a very curious or interesting number. When I read the book, I have to confess, I kind of glazed over in the middle. The early numbers from i to pi were truly interesting and every visitor to the flat that spies it on the bookshelf peeps at the end to see what the highest number is (It's Graham's Number which I wrote about way back in March 2012).

I wanted to put up a celebratory poem or something not just some pictures of an unsolved Rubik's cube and a stolen fact about the number 100. Unfortunately, the only thing I have been working on is a long history of all the chess sets that have had an impact on my life. It's in blank verse pentameter and is a work in progress as it needs tightening up and I want to add a couple of verses (one about a glass chess set where the felt had worn off the bottom of the pieces so it made a horrible noise when you played and one about the experience of playing digitally) but you'll get the gist. People who hate poetry, especially blank verse, please stay for the title as it has a pun in it!

The Joy of Sets

Battle’s coming. I can hear it in the
Rattle of the box. The sliding wooden
Lid is slid back to reveal two equal
Sides of dark and light: Stout Rook, the frowning
Bishop and my favourite: The Knight - his
Seahorse-head and unique jumping prowess
Makes him by far the most superior piece.

Learned to play the game on Father’s Staunton
Set. One Knight had had his head unscrewed by
Some unknowing toddler’s hand then chewed by
Pericles our dog. For years we played with that
Headless Knight and I’d refuse to swap him
For his twin if he remained uncaptured.
Games could turn on one unnoticed Knight.

Ed brought back from Petersburg a
Soviet Set - pinched Pawns and spiky Bishops,
Atheist King crowned with sphere in place of
Cross. Then, innocent of death and grief still
Far away, we tallied wins and wagered
Desecration rights to the loser’s grave.
(Eighty-four, Fifty-nine to Ed last count).

Lit spliff in mouth: I ponder Jack’s damn
d5 pawn that dominates the yellow
Squares and stops my knight advancing. Bloody
d5 pawn. No way he's worth a Bishop.
Must have played a thousand variations
On the Centre Game before I looked it
Up: e4, e5, d4, pawn takes pawn.


Gothic visions wrought in gold and silver,
All Inset with semi-precious stones, sit
Unloved, untouched. The King never castled.
Bishops bide their time blockaded by the
Pawns who wait forlorn upon the second
Rank. Denied their fates. Never to be
Sacrificed and never to be promoted.