Regular readers will know that I recently quit bartending and now I improve the quality of writing in little read corners of the internet for a living. As research for one of these projects, I read the Labour and Conservative manifesto proposals on Energy Policy. Anyhow, the article as I would have liked it to have gone out went unpublished - but reason will not be silenced! Here's what I found out.

(n.b. The pages aren't numbered on the online version of the manifesto - the relevant page is Sustainable Energy at the end of the section Creating an Economy that Works for All.)

There's significantly more on energy policy in the Labour Party Manifesto than the Conservative Manifesto. I've covered the entire Tory energy policy and restricted myself to showing how Labour differ on these points. That's letting the Tories set the agenda, I suppose - but what can I say? I'm lazy. Perhaps you can cover other areas (not just energy policy) on your blogs and between us we can build up a picture of where the parties stand on key issues?

To keep things light, here's a picture of a statuette of Apollo that I found in a charity shop and Charlie told me was an unsuitable gift for friends who were hosting us for dinner (we got them a potted helleborus instead). 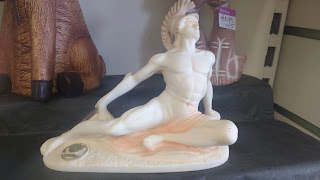 Posted by Finnginn at 03:26 No comments: