Newer readers may be wondering why a blog full of political rants about current events has the tag 'poet' in its subheading. I used to post poems up here as well. Trying to keep up with political commentary at the pace things are changing would be a full time job anyway. So instead I offer you a State of the Nation poem:

I always forget to add that if you like my poems you can read the full back catalogue in one place on my alter-ego's page over on poem pigeon. You can leave comments, but not rude ones as they get deleted.

We lost the campaign... but we learnt something

When you lose a campaign, it is easy to lose heart. The future looks like a grimmer place with less humour. You wonder why others, whom you thought shared similar views, did not seem to get on board. The 'Remain' camp grieve for the United Kingdom that we thought we were living in. The 'Leave' camp wallow in joyful division. And as if our imminent departure from the EU wasn't bad enough...

...it's looking like the Finnginn campaign to save the portrait of James Joyce in the Temple Bar has failed. We gathered what signatures we could and had messages of support from far away exotic places like Rio de Janeiro and Weymouth, but ultimately the people's voice was ignored and the picture has been removed and replaced by wainscotting.

The original artist even caught wind of the campaign and got in touch to say that the he based the portrait not on James Joyce, but on the keyboardist Ron Mael best known for his time playing with Sparks. 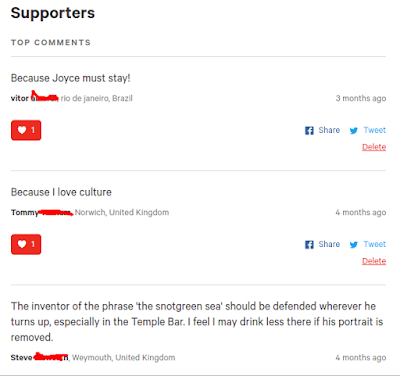 Similarly with the 'Remain' campaign. We lost. The UK will be leaving the EU and for a time this will likely make things a bit shitter for the poorest and most vulnerable. We cannot allow the Conservative Party and their neo-liberal backers to turn this country into an offshore tax haven for the super-rich. Now is the time to ramp up the campaign for a better society as part of a better world.

Posted by Finnginn at 10:27 No comments:

Don't Count on a Snap Election


I am aware that this blog has become a little political of late. So, apologies to everyone who follows me for whimsical tales from the world of bartending and updates about my cactus (Spike has gone into hiding since the referendum - he is ashamed of his adopted country).

I'm a bit of a politics junky. I wake up on election days with a feeling of excitement. Change is in the air. I stay up all night watching the results come in. I go to bed long after sunrise (usually with a sense of crushing disappointment). I'll watch any elections results programmes. I'll watch local election results. I'll even watch American presidential elections.

So you might think I'd be all keyed up with excitement about the prospect of a snap election. Well I'm not. I don't think we'll get one. Here's why:

When the Conservatives and the Liberal Democrats formed a coalition government in 2010, the two sides got down to negotiating what would go in their joint programme. Remember how the Lib Dems had promised no rise in tuition fees for students? That went. House of Lords reform? That went too. What exactly did the Liberals get out of these negotiations? They got a referendum on introducing the Alternative Voting system. (Remember that one? 42% of us bothered to turn out for that one!) They also got Fixed Term Parliaments.

Prior to the Fixed Term Parliaments Act 2011, a general election could be called at any time, by the Prime Minister dissolving parliament and declaring an election. Under the new system, parliaments last five years. For there to be an early election, two thirds of MPs have to vote that there should be one. This seems an unlikely turn of events. If you have a job that pays £66,396 a year and is guaranteed for the next four years, why would you put it on the line?

The upshot of this, is that we likely have a Conservative government overseeing the next four years. All the trade deals that will have to be remade as we leave the EU, will be negotiated by a government who favour neoliberal policies, who put the interests of financial institutions and international conglomerates before the interests of workers. This is not good news for workers' rights.

Prepare to fight for your livelihoods.

Posted by Finnginn at 07:01 No comments: