All of a sudden, I have a niece.  After nine months discussion, the parents have decided to call her Molly Rose.  A beautiful name which is also a complete sentence.  Molly rose.  I was thinking a lot about the process of naming and made up (or possibly remembered) this riddle:

What is the only thing that has ever named itself? 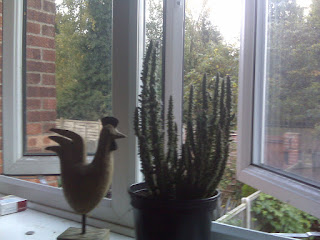 Answers in the comments please.  A small prize may be awarded.


The only living thing I have ever had to name is my cactus 'Spike' (left beside a nameless wooden chicken).  I've named a few lifeless things: characters in stories, and poems and blogposts.I am particularly bad at naming poems. I used to have a tendency to be super tangential or a touch grandiose.  Examples from my earliest journal that is still extant include: "One point zero times ten to the power of three." (Actually quite a sweet ditty about unrequited love for a classmate.) Or (I kid you not) "Teenage rebellion, the great social rebellion and the establishment of the socialist church." I like to think I had the same concerns as any other 14 year old.


These days, of course, I frequently don't bother naming them at all.  But seeing as today's theme is nomenclature, I think I'll call this one "The Island and the City":


The Island and the City


The woman in the shadows
Drags her childhood from the light,
Darkness masks the scars
Of lovers parting out of sight.
Sunset on the city walls,
The island calls again.
Hampered by near blindness,
Told to pause and count to ten.
The island or the city?
Choose the pavement or the beach.
The streetlights make the pebbles
Seem much further out of reach.
Chained to smoke-free chimney stacks
And aching for a key,
She bends her ear to seashells,
Hears the whispering of the sea.
Echoes from the decades past
Are drowning out the waves.
All her childhood fantasies
Of coracles and caves
Are fogged up by the city smog
And rumbling traffic noise.
Can't she hear that dream-whipped
Lonely child's pleading voice
Crying in the darkness:
"Give the island one more chance,
I lived and loved a lifetime
Where you learned to play and dance.
Buccaneers and smugglers
Beckon wreckers to the shore.
There's treasure to be found
And secret tunnels to explore!"
The city or the island?
Choose the crowds or solitude.
But it's a false dichotomy
Her judgement has been skewed
In favour of the city lights
By habit death and debt.
The island lives in dreams
And secret moments of regret.
Posted by Finnginn at 09:54